As I’m currently enjoying some hot and sunny weather in the south of England, on Saturday I had the pleasure of joining a team for the Round the Island Race.

Round the Island is organised by the Island Sailing Club, located in Cowes on the Isle of Wight. It is a 50-nautical mile, one-day yacht race around the island (the Isle of Wight), generally attended by over 1,400 yachts and 15,000 sailors. Round the Island attracts participates from all over the UK as well as Europe and the USA. After starting in the Solent near Cowes, the race heads westward to the Needles, around St Catherine’s Point and Bembridge Ledge buoy, then back to the finish line off Cowes.

I was sailing on J109 Jumunu, owned by the lovely and experienced Lesley and crewed by a great group of sailors who were mostly new to the team. Despite the fact that most of us hadn’t sailed together before, or sailed on Jumunu, we got along well and conducted most manoeuvres without an issue.

The Round the Island Race is on of the largest yacht races in the world. With such a large fleet of yachts, some collisions are pretty much unavoidable. We witnessed a couple of small dings that were accompanied by lots of yelling, but fortunately managed to avoid any ourselves.

The light and hot conditions made for a bit of a long and challenging day, with an elapsed time for Jumunu of around 11 and a half hours. However, with the sun shining and gorgeous conditions, spending a day out on the water was not too much of a hardship, especially as a tourist checking out the sites on the way around!

The race started with a light upwind start, gently following the tide out to the western end of the island. As yachts rounded the Needles a sea of colourful kites appeared dotted against the spectacular white cliffs of southwestern corner.

The fleet then enjoyed a long downwind leg along the southern and eastern sides of the island, with most of the fleet (at least in view of us) holding spinnakers up to Bembridge Ledge bouy until the breeze lighted and fleet compressed. 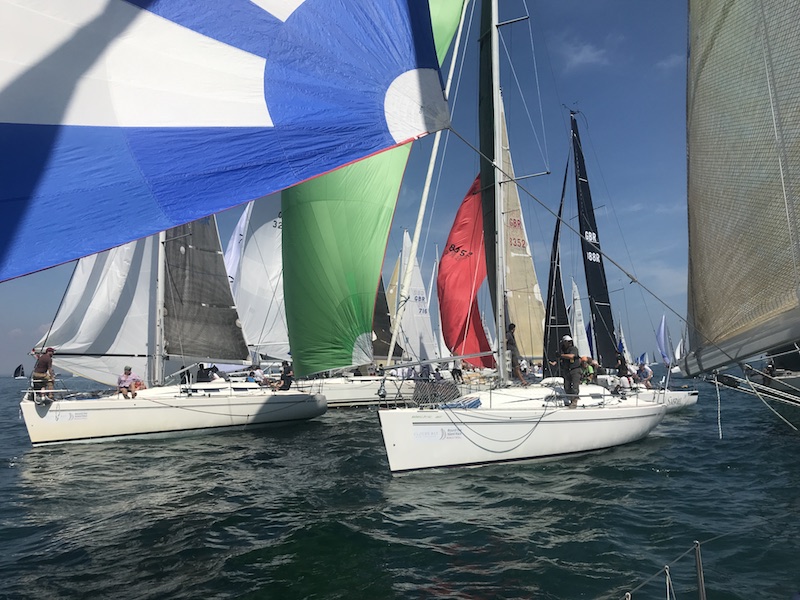 Entering back in the eastern end of the Solent the wind had dropped to near zero and temperature risen to high twenties or low thirties. Bobbing around in the full sun and no breeze, it felt hot, even for someone used to sailing in Australia! Thankfully the quarter final football (or soccer) match between England and Sweden had just started, so crews were busy watching their phones for updates on the match. Three times during the next couple of hours a loud cheer erupted in unison across the fleet – twice when England scored the only goals of the game, and again at the conclusion of the match. 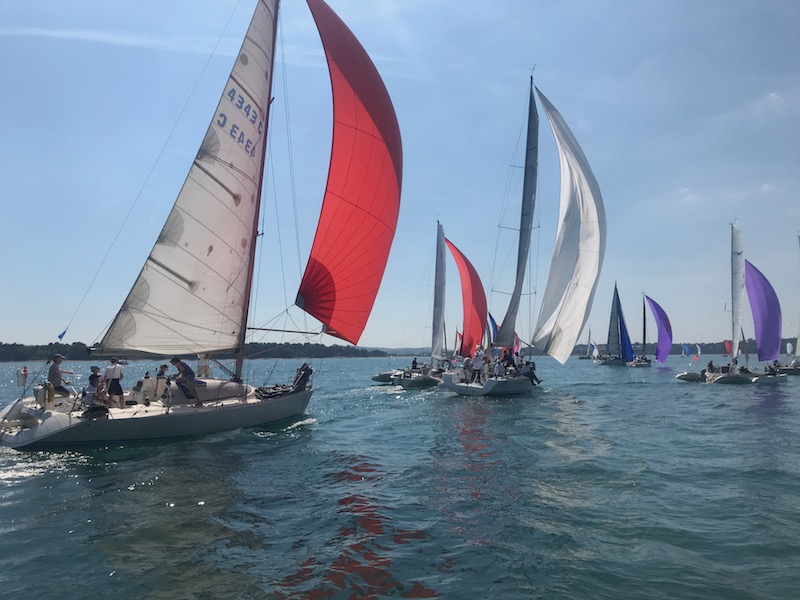 Almost like clockwork, once the game was finished the breeze finally decided to show up. Unfortunately for us, when the breeze first appeared it came in next to the shore of the island before slowly spreading out to the middle of the channel, which is where we were floating. As the breeze spread out through the fleet it finally reached us, and Jumunu picked up speed to finish the race in a refreshing 12 to 15 knot upwind leg.

All in all, it was a great day out on the water and perfect way for a wandering sailor to experience the Solent and surrounds in a fun, friendly and cost-effective way.

If you’d like to find out more about the annual Round the Island race or thinking of joining next year, visit their website: http://www.roundtheisland.org.uk/.

Asahi Regatta blows out cobwebs … not the budget

A Bit of Everything at This Year’s AWKR

Sailing the Classics; A Day out on Nina