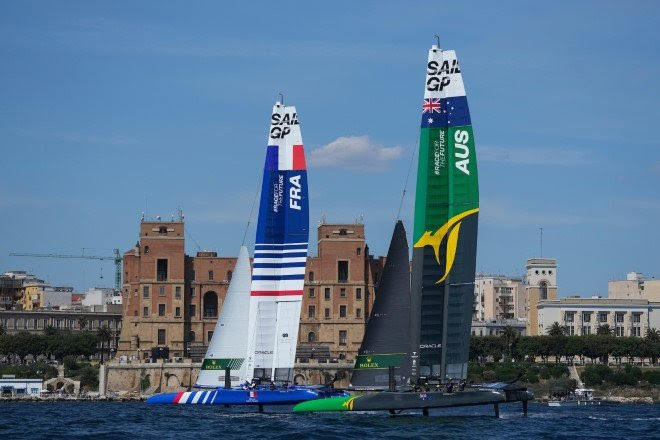 TARANTO – June 2, 2021 – In just a few days SailGP’s adrenaline-fueled racing is set to kick-off for the first ever Italy Sail Grand Prix on June 5-6 in Taranto. Packed with excitement and drama, Season 2’s opener in Bermuda set the stage for new challenges, familiar rivalries, and unforgettable crashes. Now in Taranto, the energy is surging as teams prepare for another wave of high-octane, hydrofoiling action on the water.

All eight national teams took to the shoreline racecourse today sporting 24 meter wingsails, giving each team a chance to reacquaint themselves with the high-tech, identical F50 catamarans. Two crews – Great Britain SailGP Team and New Zealand SailGP Team – were also putting in some much needed practice time with new faces onboard.

The current leader after the first event – the British SailGP Team – has swapped one Olympic gold medalist for another with Paul Goodison making his debut as the driver for the British team, replacing Ben Ainslie for the next two events. An interim shift, this substitution will have all eyes on the British team as it aims to retain its position at the top of the leaderboard.

Goodison said: “This is my first time ever sailing on the F50 and I was very impressed by the team and the boat and it was just great to get out sailing again. There is a little bit of apprehension for me going into my first event but, to be honest, I am just super excited and just can’t wait to get out there and line up with the other boats and start racing.”

Swiss born Arnaud Psarofaghis also had his first two days in the driving seat. The double European champion in the foiling Moth class, takes the wheel of the New Zealand SailGP Team after the date shift for the Tokyo Olympic Games sees Peter Burling and Blair Tuke step aside into a supporting role for the next two SailGP events in Plymouth and Aarhus.

Additional crew changes on the New Zealand boat include the arrival of James Wierzbowski as flight controller, and Jason Saunders as wing trimmer. The three new team members took to the water for the first time with their sights firmly set on moving up the leaderboard from fifth position.

Southern Italy will see the reemergence of Jimmy Spithill’s United States SailGP Team and Nathan Outteridge’s Japan SailGP Team after a nearly catastrophic collision in Bermuda that severely damaged both boats and took them out of the running for the event. After a race against time, both boats returned to the water today – just in time for some vital training ahead of the season’s second event this weekend.

Japan SailGP Team flight controller Francesco Bruni said: “It is very exciting to be out sailing on the water today, especially for me at my home event. I’m really looking forward to seeing a lot of fans. It’s gonna be very good racing in Taranto.”

Joining the F50s on the water over the weekend are the successful candidates of SailGP’s boundary-breaking and gender equal Inspire Racing program. Fans can expect an on-water showcase of young males and females racing for the future – nine sailors on WASZPs, and 18 sailors on RS Fevas – who will share the racecourse with the supercharged F50 foiling catamarans.

A few final tickets remain for the upcoming action-packed weekend. For more information about ticketed experiences on-shore in the grandstand at the Rotunda, and the Bring Your Own Boat program, visit SailGP.com/Taranto.

Action at the Italy Sail Grand Prix gets underway at 1:30 p.m. local on both Saturday 5 and Sunday June 6. Fans unable to attend can watch the live broadcast in Italy through official broadcast partners Rai Sport and Sky Italia, and by downloading the award-winning SailGP App. For details on how to watch globally visit SailGP.com/Watch.

Friday morning’s pre-event press conference will be streamed live, prior pre-registration, through MediaHub.SailGP.com, beginning at 10 a.m. local (GMT +2). Media are invited to submit questions to be put forward to teams.