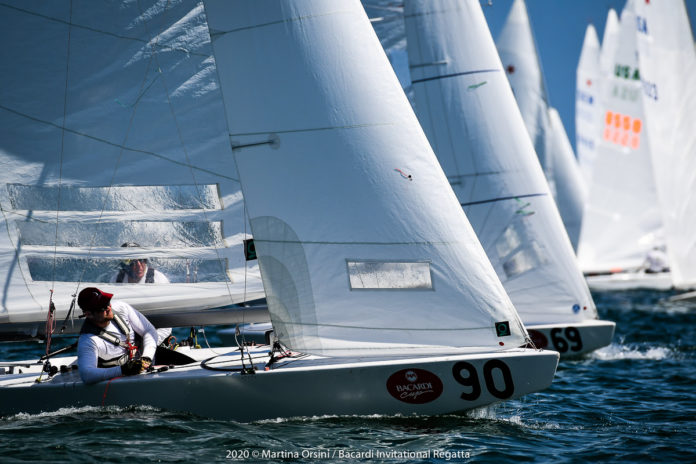 Today, Thursday 5 March, the Star Class was joined by the complete line-up of one-design classes racing at the Bacardi Invitational Regatta. Taking on their first day of racing were the J/70, Melges 24, Viper 640, and, brand new for the race track this year, the VX One sports boat, AV8 and Windfoil classes. The blend of sailors battling it out for glory on Biscayne Bay is phenomenal, with a mix of professional rock stars and super-talented Corinthian teams.

For 2020, the Bacardi Cup and Bacardi Invitational Regatta have welcomed a record-breaking 175 entries and well over 500 sailors representing 19 nations, proving its status as the sport’s most popular Spring regatta. Racing is across four course areas, with the Star Class on a dedicated track and course sharing for the Melges 24 and J70, Viper 640 and VX One and AV8 with the Windfoil.

The Bacardi Invitational Regatta was in full swing today and all of the classes were able to get a taste of the joy of racing on Biscayne Bay as Miami showcased its Caribbean genes of heat, humidity and a steady 9-10 knot breeze to sailors from around the world.

Mateusz Kusnierewicz (POL)/Bruno Prada (BRA) made it another big day in the Star Class, as they seized the bullet to make it three wins in a row and lead the fleet on a perfect scorecard of 3 points. The pair have shown classy form and today secured a critical points edge with just two races to go to crown the 93rd Bacardi Cup champions. Behind the order of play remains the same at the end of the day as at the beginning with Eivind Melleby/Joshua Revkin (NOR) and Augie Diaz/Henry Boening (USA) pushing hard in second and third. It will now take an epic assault to unseat the reigning Star Class World Champions Kusnierewicz and Prada from their top billing, but one the chasing teams are willing to try. Among them are Paul Cayard (USA)/Pedro Trouche (BRA), who sit in fifth overall after a disappointing 17th finish yesterday. But they rebounded to deliver their best day, a 2nd place, and proved they can still fight amongst the best.

“This might be my 25th Bacardi Cup, surely the first one was in 1980,” commented Olympian, multiple World Champion, Louis Vuitton Cup and Whitbread Round the World winner Paul Cayard. “We had a very bad day yesterday when I could not put us in a good position at the start, but I am happy about today, our best result so far. It’s just that Mateusz and Bruno are so fast, and with three wins, we can all just fight to be second best.”

Out on the track first were the Melges 24 and J70 who raced in the south of the bay, starting out in a fluky 5-6 knots before the breeze steadied to 9-10 knots. Three races in the Melges 24 saw the big hitters out front early on, with Bora Gulari and his team of Kyle Navin/Norman Berg/Ian Liberty and match racing superstar Taylor Canfield setting the pace to secure two wins and a second place to lead overall. They know what it takes to win, having wrapped up victory in one of the Bacardi Winter Series warm-up events in January 2020. Just 2 points behind are KC Shannon/Jackson Benvenutti/Ben Lynchi/Tom Sawchuk/Elizabeth Whitener, with Peter Duncan/ Victor Diaz de Leon/Mattero Ramian/Carlos Robles/Willem Van Waay in third. Duncan and crew race in Miami fresh from their Melges 24 victory at last month’s 2020 NOOD Regatta where they nailed an all-win scorecard.

The aptly named ‘Eat Sleep J Repeat’ helmed by reigning J/70 World Champion Paul Ward (GBR) with crew of Ruairidh Scott/Ben Saxton/Mario Trindade were the pace setters in the J70 fleet, stamping their authority on the chasing pack with a 2,2,1 scorecard, but it was no easy racing. Ward’s crew boasts plenty of successes, but so do the other teams with World Champions and Olympians aplenty. Second to Ryan McKillen/John Wallace/Sam Loughborough/Mark Mendelblatt (USA) and third to Chile’s Pablo Herman/Luis Felipe/Felipe Echenique/Will Welles.

“It was a really, really good day and we finally started to work out how to sail out here,” grinned Paul Ward. “We always love coming to Bacardi Cup because it is cold, wet and miserable at home and the sun is shining here and we have some fantastic racing.”

Anticipating the races ahead, Ward continued, “There are two more days and there are a lot of fast boats, which is why we love coming out here as the competition is great. We’ve just got to see how we go and the boys are going well, everyone’s enjoying themselves and the bar is open, so life is good!”

In the Viper 640 fleet, it was Will Graves/Ryan Cox/Greg Dair who set the early running, with results of 1,2,3, but the defending Bacardi Invitational Champions Geoff Ewenson/Mary Ewenson/Tyler Bjorn soon settled into their groove to claim wins in races 2 and 3. This fleet is renowned for its camaraderie, so plenty of post-race analysis chat flows helped along with the Bacardi hospitality.

“Today was nice, a beautiful building breeze out of the east which took a bit longer than expected, but eventually it came in,” commented Geoff Ewenson who is a familiar face in Miami, counting fifteen appearances at the Bacardi Cup. “We were caught a little bit out of tune in the first race, but we figured it out throughout the race. We knew the boat didn’t feel quite right, so we worked hard after the first race and made some adjustments to the rig tune and were able to find our speed and were particularly fast downwind.”

An all-American line up is contesting the VX One fleet, and reflecting the closeness of racing a different team won each of the three races. Matching scorecards to Ched Proctor/David Guggenheim/Monica Morgan and Sandra Askew/Kyle Kandt/Jason Curvie (USA) in the first two races was ultimately settled by a 2nd place finish for Proctor and crew in race 3 to give them the series lead. Second to Askew/Kandt/Curvie on tiebreak advantage over Bill Wiggins/Jeff Eiber/Farby Cappellin.

“Miami is my favourite place to go sailing,” smiled Proctor, before Guggenheim chipped in, “The water is warm, the breeze is strong!”

“It was pretty nice today, as the first two races were fully powered up,” continued Proctor, “although the last race we were a little depowering. It was a pretty perfect day for sailboat racing. This is the best place in North America to sail in the winter.”

Brazil’s Gabriel Browne produced a punishingly accurate performance to claim four back to back race wins in the Windfoil Class. Hunting him down in each race with four second places was Alexander Temko (USA) with Justin Ahearn (USA) in third overall.

“We have a lot of participation at this event, as it is our first time with the big boat fleet,” commented Alex Morales, representative of the Windfoil Class. “We have some of the top guys from Brazil and the USA, plus some juniors from the Biscayne Bay Yacht Club who are doing their first event in this Olympic windsurfing class. We are super excited, we feel really welcome and are really pleased to be part of the Bacardi Invitational Regatta.”

Plenty of kite racing pedigree in the hydrofoil Cabrinha AV8 Class and joining the AV8 are legends Damien Leroy and Jon Modica, who make their AV8 racing debuts amongst the normal class veterans. Leroy was fast off the start and superbly foiled his way to knock out four race wins. Second to Brendan Healy (USA) with Kent Marcovich (USA) in third.

The Bacardi Invitational Regatta marks the third major event of the season for the Cabrinha AV8 class. The AV8 is a strict one design hydrofoil racer, positioned as an affordable and accessible form of hydrofoil kite racing.  Racing is tight, tactical and fast with speeds easily reaching the 30 knot range in as little as 10 knots of wind speed.

Tonight teams will enjoy another memorable party night hosted by Bacardi at Shake a Leg Miami. Racing continues on Friday 6 March, with one race for the Star Classes and three to four races for all other fleets.

Sports boats, VX Ones back for more Port Stephens action