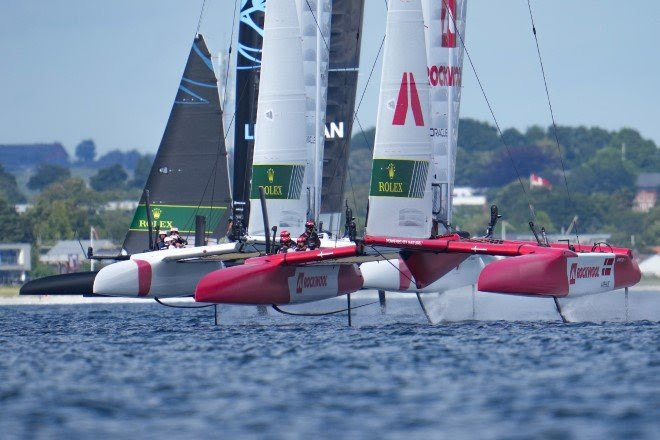 The City of Smiles, Aarhus, now has a little more to be happy about as the hometown crowd was greeted with a first-ever win by the home team. Nicolai Sehested led the Denmark SailGP Team presented by ROCKWOOL to an incredible Race 1 finish, putting to bed any doubts about his drive to win at SailGP.

The inaugural ROCKWOOL Denmark Sail Grand Prix was met with rolling clouds and shifting winds making the racecourse a ‘minefield’ that tested the resolve of the world-class athletes on Aarhus Bay. Proof of the close racing and intense competition of the global championship, crowds witnessed three different race winners on the opening day with the United States and Great Britain claiming the other two race wins. Additional drama came in the form of a capsize pre-start for Phil Robertson and the Spain SailGP Team which took them out of contention for the day.

Familiar with the waters of Aarhus Bay, the Danish team kicked off its home event with a bang by taking an early lead in the first race of the day and fending off a late charge from the Aussies to take the win by a matter of seconds. Unfortunately, the success was short lived and the Danish found themselves further down the fleet in the next two races, dropping Sehested’s team to fourth at the end of play.

Sehested said: “It was really nice to get that race win in front of our home crowd. It was a good day for us but unfortunately in the last race we damaged our rudder so that wasn’t a good result. But, we were sailing the boat well and we are off to a good start. Now it is about tomorrow and we need two good race results to get in that final race. It is a minefield out there so if you are not on your game, you go from first to last so we just need to make sure we are on our game tomorrow.”

Jimmy Spithill’s new U.S. crew lineup – following a last minute replacement for Paul Campbell-James after he broke his leg in training – took the second race win and, with Ben Ainslie back in the driving seat, the British team won Race 3. Despite not winning a single race on Friday, it was Tom Slingsby’s Australia who ended the opening day in pole position. With two second places and a fifth place finish, Australia is at the top of the leaderboard – ranking one point ahead of Ainslie’s British team, and two in front of Jimmy Spithill’s U.S. team in third.

Slingsby said: “It was like snakes and ladders today. We had some races where we were a long way back with some good comebacks and we’re really happy with just getting some good results. We didn’t think we’d end up on top of the leaderboard after today. The comebacks on that last lap helped us.

“It’s going to be really tough tomorrow in lighter winds. We need to do a bit of sailing with our three-up combination with Jason Waterhouse so we may need to head out early to do a little practice to figure out how we want to sail.”

With Peter Burling’s return – fresh from competing at the Olympic Games where he took silver with teammate Blair Tuke – New Zealand looked on form. Burling’s team initially ended the day in third place overall but, upon review of an incident with Billy Besson’s French team – in the final race of the day – the Kiwi’s were hit with two penalty points by the umpire, subsequently dropping the team down to fifth as it was felt they could have done more to avoid the collision. France, as the boat in the wrong and causing the damage, was penalized four points, placing them seventh after day one.

Japan and France, sitting sixth and seventh respectively, head into day two with a lot of work to do if they are to qualify for the final three-boat race to decide the ROCKWOOL Denmark Sail Grand Prix winner.

It was a disappointing day for Robertson’s Spanish team finishing with zero points owing to the pre-race capsize. The incident took place during the team’s warm up less than an hour before racing was due to commence.

Robertson said: “We were just warming up feeling pretty comfortable with the boat and did one of the more difficult maneuvers out there and probably overloaded the board in the moment, at the speed we were doing, and snapped the foil. It did quite a bit of damage to the boat so it’s something that we’ve got to assess and hopefully fix tonight and be back tomorrow.

“To be honest it was a bit of a lame capsize. The board breaking and the major damage is what we’re most concerned about. It’s a tough one, we’re a really young team. Most of these teams have sailed for many, many years in the America’s Cup. We’ve got no experience, we’re trying to learn as we go.  We get two days of training and probably a few little instances like that where maybe the guys with experience wouldn’t have done a maneuver like that, but we’re trying to catch up to them.

“It’s a shame it happened on a race day. We’re going over the boat with a fine tooth comb and if it’s repairable then it’ll get repaired, if it’s not then we’ll be working all night and tomorrow to get it ready for the next event.

The ROCKWOOL Denmark Sail Grand Prix continues on Saturday, August 21 and consists of two final fleet races followed by a podium race, with the top three boats in the ultimate showdown to decide the winner. Fans can enjoy the action from the shore in the ticketed, waterfront spectator area or via Bring Your Own Boat program, further details at SailGP.com/Denmark.  Fans unable to attend can watch the broadcast live in 175 territories, including via TV2 in Denmark. Full details can be found at SailGP.com/Watch.

Early Bird Entry Prizes Announced for the 2020 Festival of Sails