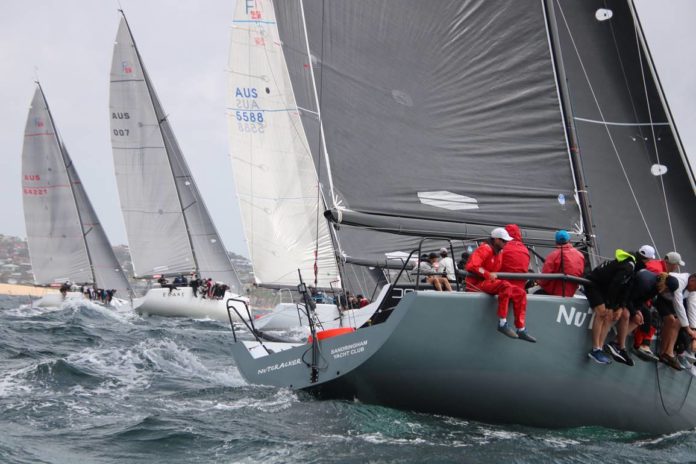 Day one of the Farr 40 One Design Trophy was sailed off Harbord Diggers in a nor’easter of 15-17 knots and Nutcracker’s substitute helmsman Ray Roberts took three from four bullets earning Boat of the Day with a significant lead of six points.

Roberts, owner of the infamous Farr 55 named Hollywood Boulevard, was pleased with today’s result.  “I want to thank Rob Davis and Andy Baker for having me along this weekend.  I really enjoyed the close racing and hope we can continue our winning streak tomorrow.”

With a star-studded crew including Nathan Wilmot calling tactics, Bob Wilmot on main, John Flannery on mast and Tom Grimes in strategy, team Nutcracker barely put a foot wrong all day with three wins and a fourth place in race two.

With borders still closed, Nutcracker Owners Rob Davis and Andy Baker were thrilled with today’s result.  “Obviously we are bitterly disappointed not to be there but we are pleased the Class got a regatta away given the year we’ve had.  I’d like to thank Flanno (John Flannery) and Bobby (Robert Wilmot) for putting the crew and boat together and of course we are grateful to Ray for stepping in.  Go Nutcracker! Victoria’s hopes are riding on you.” Davis said.

Farr 40 Owners left nothing to chance for the first regatta of the season calling in the big shots with Olympic medallists Tom Burton on Double Black and Will Ryan calling tactics for Newcastle entry Good Form.

The other win of the day went to father and son team Tom and Alan Quick with Tom at the helm.  Outlaw were racing short of their regular crew, however, still managed to perform and pull off a win. Tomorrow, Alan will take over the helm and Tom will be spectating.

The Class would like to thank PRO Phil Yeomans and the legendary race management team for efficiently punching out four quick races today without a hitch.  Due to tomorrow’s forecast, racing has been brought forward to a 10am start for the final races which will be sailed inside the harbour on The Sound.