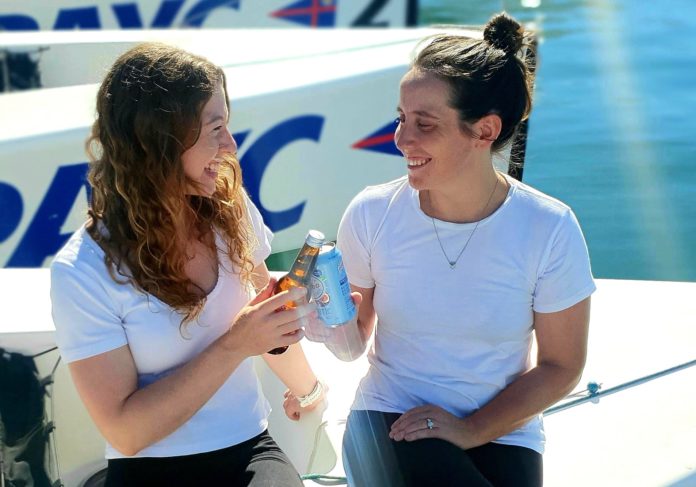 Two Sydney women are out to break records as they set sail in the notoriously challenging Sydney Hobart Yacht Race as the first ever all-female double-handed entry.

The average team competing in the infamous Sydney Hobart Yacht Race has 10 crew members or more, but when Alice Tarnawski (26) and Bryony Gregory (30) start the race on 26 December 2021, they will be the only two people onboard their yacht.

The exhilarating sport of two-handed sailing is on the rise and the two women from Sydney’s Northern Beaches are leading the charge with the first ever all-female double-handed team to compete in the race with the discipline’s debut to the Sydney Hobart Yacht Race this year.

The two women from the Royal Prince Alfred Yacht Club have dreamt of competing as the first female double-handed team in the famously tough Australian race for as long as they can remember.

Initially backed with nothing but a dream and the determination to succeed, these best friends reached out to experienced two-handed sailors to see what it would take to bring their campaign to life. The campaign is one of the first Australian programs aiming to develop youth sailors and their skillsets to compete against the world’s best at an elite offshore level in double-handed sailing.

A dream will only take them so far; the duo now have their work cut out for them with hundreds of hours of training required on and off the water over the next year to prepare for the race, and all whilst working full-time jobs.

But none of that phases Alice and Bryony – they are here to compete, and they want to win.

The duo will be competing in the brand new, first-of-its kind, performance offshore 30-footer, the Farr X2 from Farr Yachts Australasia. The yacht, named “Nexba”, is the first X2 off the production line, commissioned by Sydney sailor John Bacon to get these fantastic yachts on the water.

The new yacht will replace Bacon’s previous Class 40 of the same name and is born from a strong partnership between Bret Perry of Farr Australia, John’s previous two-handed partner David Sampson of VicSail and the ongoing support of homegrown Aussie start-up success story Nexba, who have become Australia’s leading Naturally Sugar Free drinks brand in recent years. The brand looks to support ‘naturally brave’ individuals and projects and were so inspired by Bryony and Alice’s story they just had to get involved.

Related content: Watch an interview with Brett Perry in episode 2 of Dockside with Deb.

The Nexba boat will be arriving on Australian shores mid-2021 ready for some rigorous training sessions, including competing in many of the major blue water offshore series on the east coast ahead of the race south in December.

From the outset both Bryony and Alice were eager to compete for not only a sense of achievement, but also a cause close to their hearts. The women are proud to be sailing, and raising funds, for Jean Hailes for Women’s Health, a pioneering women’s health charity intent on opening the conversation around chronic conditions such as endometriosis and polycystic ovarian syndrome (PCOS) that affect so many of the Australian female population. The foundation also supports valuable research and accessibility programs to bridge the gaps in healthcare services for women of all backgrounds and ages.

This energetic and driven duo are ones to watch this Sydney to Hobart, backed by over 20,000 miles of collective offshore experience, as well the many one-design, match racing and offshore trophies they have collected over their years on the water.

Talking of their plan to prepare for the race, the duo comment, “We want to learn as much as we can to be the most prepared boat on the start-line come Boxing Day, not scared to send it hard, have fun and collect trophies”.

Alice Tarnawski is a physiotherapist and Pilates instructor working at Bodyworks Physiotherapy on Sydney’s Northern Beaches.

Alice’s passion for sailing began at age 11 and despite growing up in Grose Vale near Sydney’s Blue Mountains, she travelled regularly to Pittwater on the weekends to sail with her family and to participate in the RPAYC’s Youth Development Squad. Since then, she has competed on both a national and international scale in Match Racing, offshore racing and One Design racing, with her most recent achievements including Corinthian World Champion at the 2019 Farr 40 World Championships held in Long Beach California. She regularly competes across Sydney’s One Design scene in a variety of classes and has competed in numerous East Coast Bluewater races including the Pittwater to Coffs, Sydney to Goldcoast and Bluewater Pointscore Series.

In 2020 she stepped up to develop her navigation skills onboard Richard Hudson and David Beak’s ‘Pretty Woman’ for the Bluewater point-score series.

Related content: Watch an interview with Alice Tarnawski episode 3 of Dockside with Deb.

Bryony Gregory grew up sailing in the UK, starting in the international Cadets at age 7 out of Frensham Pond Sailing Club and travelled around the country competing in national events. She came over to Australia over 9 years ago on a working holiday and with the dream to compete in the Sydney to Hobart.

Since then, she has become an Australian Citizen, competed in 3 Sydney to Hobart’s and many other Bluewater Point-score races along the East Coast.

Sailing is her passion which she’s also managed to make into a career, she looks after and maintains racing yachts and gets them ready for events. She’s clocked over 20,000 offshore miles from racing and deliveries.

Two handed offshore sailing is a discipline where only two crew members are allowed.

This heightens the level of fitness, stamina, planning and resilience demanded from its participants making it one of the most challenging disciplines within the sport. In a race like the Sydney to Hobart, double-handed teams will not only need to prepare their yacht and equipment for the often-arduous conditions showcased by this testing yacht race but have strong and versatile sailing skillsets so that each teammate is confident to complete every job on board and to sail the boat solo whilst their partner rests.

On background of the COVID-19 lockdowns and the potential inclusion of double-handed sailing in the Olympics, as well as the allure of the challenge of double handed sailing combined with the practicality and simplicity of organising just two sailors to get a team on the water, this discipline of sailing is growing in popularity and in 2021 will have its debut in the Rolex Sydney to Hobart Yacht Race.

Notice of Race Released for 2020/21 Sharpie Nationals in Canberra