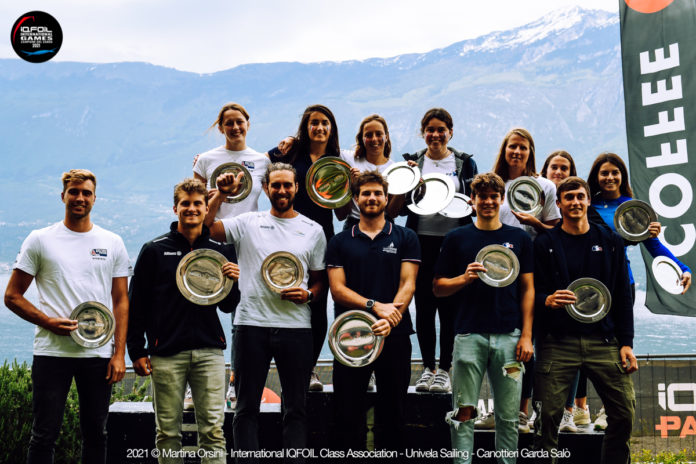 They came, they saw and they conquered. The French squadron was the largest national group at Univela Sailing for the 2021 iQFOiL International Games and the one featuring some of the strongest athletes. Among them, Lucie Belbeoch and Nicolas Goyard who have been leading their respective ranking for most of the week and sailed flawlessly in every one of the three formats of the iQFOiL Class, Course, Slalom and Marathon. The rest of the podium for the Women is composed by Islay Watson (GBR) second and Delphine Cousin (FRA) third, while in the Men’s the second is Huig-Jan Tak (NED) and the third Matthew Barton (GBR).

To cap the day and the perfect week organized by Univela Sailing and Società Canottieri Garda e Salò with the patronage of Regione Lombardia, the rest of the sailors went out for a racing session with some slaloms in the early afternoon. This shaped the ranking from the 13th to the bottom and the podiums of the U21 athletes.

The flourishing Olympic iQFOiL Class squadron will now head into some training before the World Championship in Silvaplana, Switzerland, from 16 to 22 of August.

French Designed JPK to be Manufactured in NSW