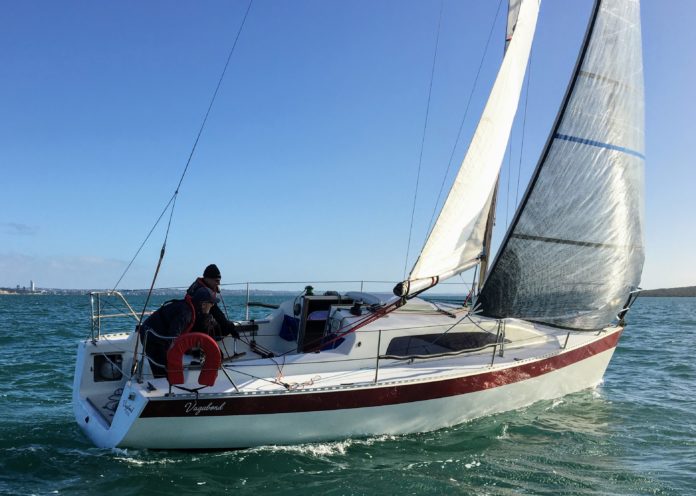 Last Sunday saw the running of the second stage of the aptly named and “covinnovative” Mount Gay Rum 1-2-3 Series. Two handed, windward leewards with no extras was the order of the day.  Twelve competitive 88’s and a bunch of hardy Pied Pipers assembled in the vicinity of Auckland Harbour’s Northern Leading Light to do battle in ten to 20 knot Southwesters over five intense and closely fought races.

Matt shared his thoughts on the day:

“It was some of the most fun racing I have done in a long time. It took a while to get in the swing of sailing an 88 again but lucky Paul and I learnt how to tack after one race. It was a thrill to come into a gate mark three wide and watch 4 x 88’s trying to get around the top mark all abreast.

This style of racing, being one day, short sharp and intense, should be something people should be seeking in my opinion. I would highly recommend it.

I would like to thank Paul Atkins for inviting me and Johnny Bell of Akaroa for kindly lending his Boat. It was a blast, cheers!”

We also received the following from Dangerzone’s On Board Reporter Brad Marsh:

The two-handed race day of the BBYC 1-2-3 series was met with so much anticipation by team Dangerzone that Robin had her bag packed ready for Sunday’s racing on Wednesday afternoon! The night before race day she slept like a possum, eyes wide open in eager anticipation.

The day was met with picture perfect conditions and Robin was like a coiled spring. The first race with J1’s was a big ask for a smaller crew to tail and grind every tack.  The compulsory change to J2 signalled by flag Foxtrot  was a welcome sight going up in the second race.

Whilst Robins enthusiasm and sheer determination was well received her husband’s effort on the tiller was something short of dismal and the days results went up and down like a yo-yo. If Robin was the hero, there were definitely times I was the zero.

But as we sailed home after the last race, we summarised the day with a few points:

– Most importantly though I am still married after such a risky experiment!

Huge congratulations to Undercover and Mindbender for a good result on a tricky day, thanks to the fleet for some good racing and as always thanks to my brother (Chris Marsh) the RO and his team who showed nerves of steel to call Dangerzone OCS in the final race of the day……..

It’s great to see Brad and Robin are still talking as they build their campaign targeting the inaugural “SSANZ Young 88 Two Handed Triple Series Mixed Doubles Trophy” (blimey to fit that title it will need to be a big cup!) to be sailed during July and August.

James Corbett continues to lead the series and is aiming to consolidate on his win last year but is only 1.5 points ahead of Brad Marsh on Dangerzone. Like usual for this fleet there are plenty of close battles going on all the way through the standings.

The 88’s are now well primed to step up for the third instalment of the 1-2-3, the “Three Handed Champs” with extras on Sunday July 19th.

For more info on the 1-2-3 Series including results, photos and videos go this this link: https://www.young88.org.nz/events/64047/ and for more on the Young 88s in the SSANZ Triple series this link:

For more information on the Young 88 association refer to the Class Association web site www.young88.org.nz

SailGP Launches Diversity, Equity and Inclusion Initiative as Part of Race for the Future

Green Light for the Farr 40 Class

The overall winning Ichi Ban crew with the Tattersall Cup