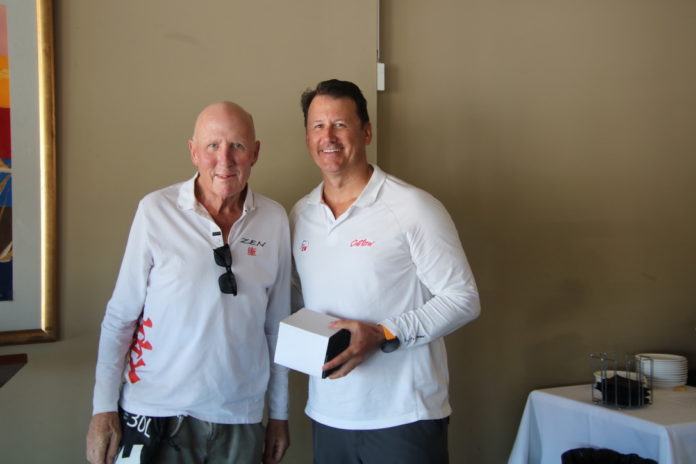 CYCA/RSYS yacht Outlaw has today been crowned the NSW Farr 40 State Champion.  The prizegiving was conducted at Middle Harbour Yacht Club after racing concluded  with a special presentation by former Class President and owner of Zen, Gordon Ketelbey.

Races 4, 5, 6, and 7 were run on the inshore Sound course by PRO, Phil Yeomans, and the race management team. Conditions were an improvement on Saturday’s racing with early cloud clearing and breeze increasing to the 10 – 12 knot range.

After Day One Nutcracker, owned by Andy Baker and Rob Davis, held the lead in the  series, followed by Outlaw and Good Form. The lead changed throughout the day with  Race 4 being won by current Class President, Rob Reynolds and his crew from MHYC on  Exile. Tactics onboard were called by Joe Turner.

Race 5 was won by Outlaw representing the CYCA and RSYS, steered by Tom Quick, under the expert eye of David ‘Chappo’ Chapman. Nutcracker had another win in Race  6 but that was not enough to hold off the Outlaw team on a countback.

The Newcastle entry, Good Form rounded out the podium, on another countback with  Exile.

Crews enjoyed the extremely tight racing on the Harbour and are looking forward to some more exciting competition during the final event for the Farr 40 season, the National  Championships, which will be hosted by the Cruising Yacht Club of Australia over 12-14  March 2021.