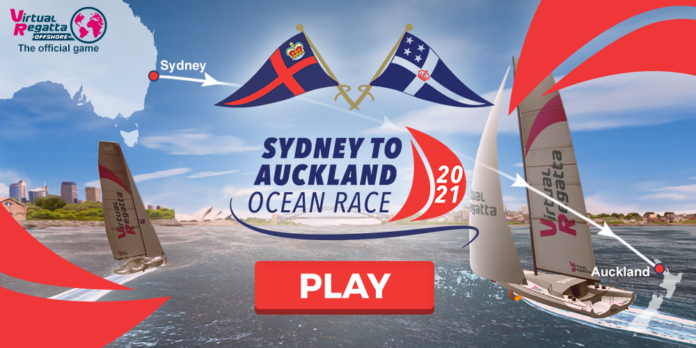 Royal Prince Alfred Yacht Club, in conjunction with the Royal New Zealand Yacht Squadron, have developed a race between two great southern hemisphere sailing cities, Sydney and Auckland. The course covers 1250nm of unpredictable ocean, the equivalent of Sydney to Hobart and back again without stopping, and to win will require not only great preparation and sailing but a large dose of endurance and self-sufficiency.

The race was scheduled to start on the 30th January 2021 and had received great interest from around the globe, however; like many international sporting events fell foul to the COVID-19 global pandemic.

The race has been rescheduled for 29th January 2022, visit www.sydneytoauckland.com for the Notice of Race and entry, in the meantime we have linked up with Virtual Regatta to provide a virtual race starting on the original date of 30th January 2021.

Virtual Regatta started in 2010 as a small team of passionate designers, engineers, and entrepreneurs gathered around the idea that virtual sailing sports games can mix with real races and real skippers. Their R&D has brought them to release the most popular sailing games in the world with more than one million players each year.

Now, Virtual Regatta is an exclusive partner of the “World Sailing” federation and of the “eSailing World Championship” the most renowned sailing eSport competition through the world. Their product empowers people to take an active part in the most famous regattas across the world including the Vendée Globe, Route du Rhum, Sydney Hobart, The Ocean Race, America’s Cup and now the Sydney to Auckland Ocean Race.

The partnership between the great offshore and ocean races and Virtual Regatta brings together renowned offshore sailors, Corinthian sailors and gamers to race on a realistic platform that mirrors the live conditions of the race. Sail configurations, wind and sea conditions as well as routing choices are all part of the fun of the real and virtual races.

It will be exciting to have the opportunity to see how the conditions in the race would have played out, how the high and low pressure systems throughout the Tasman Sea will affect the routing and duration of the race. The game uses the actual weather conditions across the course for the race so we will not yet know if it is going be a long slow race navigating a series of high pressures or a bumpy blast across the ditch characterised by low pressure systems coming up from the Southern Ocean.
The race to the America’s Cup is still on; but this time it will be fought on our phones, tablets and PCs from the comfort of our desks and armchairs.

New virtual sailing experience for PC and Mac from MarineVerse