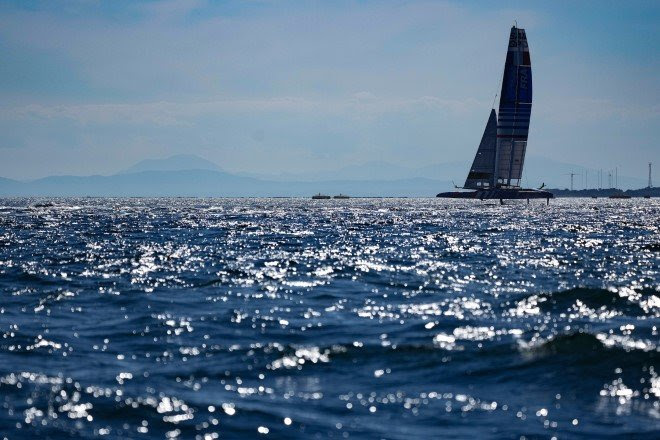 SailGP – the sport’s pinnacle league featuring the most competitive racing on-water – is the first organization to achieve both the Carbon Neutral International Standard and three gold medals in the UN Climate Neutral Now Initiative by achieving the highest standard for measuring, reducing and contributing its entire global footprint since day one.

SailGP’s eight national teams compete not only for the biggest prize in the sport, they also Race for the Future, championing a world powered by nature (wind, sun and water). With the ocean as its racetrack, SailGP is celebrating World Oceans Day with the news that they have achieved three gold medals from the United Nations Climate Neutral Now initiative.

The achievement shows SailGP’s strong commitment to putting purpose at the heart of its global championship, making more impact than it’s footprint to become verified as climate positive by One Carbon World; a global resource partner of the UN Climate Neutral Now Initiative.

SailGP’s triple gold medal achievement in the Climate Neutral Now initiative is a recognition that the league has;

Fiona Morgan, SailGP director of purpose and impact said: “We are very proud to have achieved triple-gold recognition in the United Nations Climate Neutral Now Initiative and today are celebrating being climate positive with our staff, fans, host cities and partners on World Oceans Day. We want to use our platform to show that every business, every sport and every single one of us has a responsibility and an opportunity to make small changes that can deliver change for a better planet. We all have to make changes and race for the future together.”

SailGP uses cutting edge technology to remove more carbon than its footprint and is committed to being 100% powered by nature on-water and on-shore at events by 2025. Initiatives such as adopting clean energy, switching to zero emission ePropulsion electric engines for some of its on-water support boat fleet, purpose-enhancing Race For The Future SailGP team partnerships, efficiencies in global sports event logistics and revolutionary remote broadcasting capabilities – resulting in more than 50 tonnes of shipping container weight reduction – are all part of SailGP’s journey towards racing for a better future.

Fresh off-the-back of a spectacular second event and the first-ever Italy Sail Grand Prix in Taranto, SailGP is breaking boundaries and using it’s platform for good. The adrenaline-fuelled championship races in iconic city venues, shining a light on the positive impact that sport can have in the local communities and the importance of the role of cities in the transition to a low-carbon economy.

Being climate positive means that SailGP is going even further than achieving net-zero carbon emissions by removing more carbon dioxide from the atmosphere than it emits, committing to being Climate Neutral Now and contributing to a series of clean energy projects that remove more carbon emissions than are generated. From day one, SailGP has retired 50,000 tons of CO2 from the atmosphere, equivalent to taking almost 11,000 cars off the road for a whole year.

SailGP has measured and validated its entire carbon emissions since 2018 – through a partnership with One Carbon World – and has taken responsibility for Scope 1, 2 and 3 carbon emissions which includes the whole supply chain as well as fan and spectator impact.

Andrew Bowen, CEO of One Carbon World said: ‘‘There is a great opportunity for the sports sector to play an impactful role in the fight against climate change. SailGP has taken this opportunity seriously and is already leading an example – they are ready to respond and adapt to the changes that affect both spectators and participants. Working closely with the purpose and impact team at SailGP, I could see that environmental sustainability is not simply a destination for them, but part of their DNA and an innovative journey and their achievements are simply fantastic.’’

Niclas Svenningsen, manager of Global Climate Action at UN Climate Change said: “We are delighted to see SailGP achieve triple-gold status in the Climate Neutral Now initiative. This is a great example of steps that sports can take to not only reduce their own climate impact and raise awareness within the sports community, but also practically support emission reduction and sustainable development projects around the world. In the fight against climate change, we need all hands on deck and SailGP is leading by example.”

Visit SailGP.com for more information on Race for the Future and SailGP’s Climate Positive initiatives.

Fremantle to Bali Offshore Race Countdown is on: one year...